At the beginning of 2019th year Olympus unveiled a new top class camera – E-M1X. Here are some key specifications:

I’m doing a lot of action photography (sports/concerts/wildlife) and E-M1X was looking very interesting to me. I asked Olympus Bulgaria when it will be possible to test it and they surprised me, that a test body is ready!

It was with me for a day and a half, this is why I’m writing an initial impressions (not in-depth) review.

My first feel about it – integrated battery grip and a “square” body, high quality and stability. Really a pro camera! 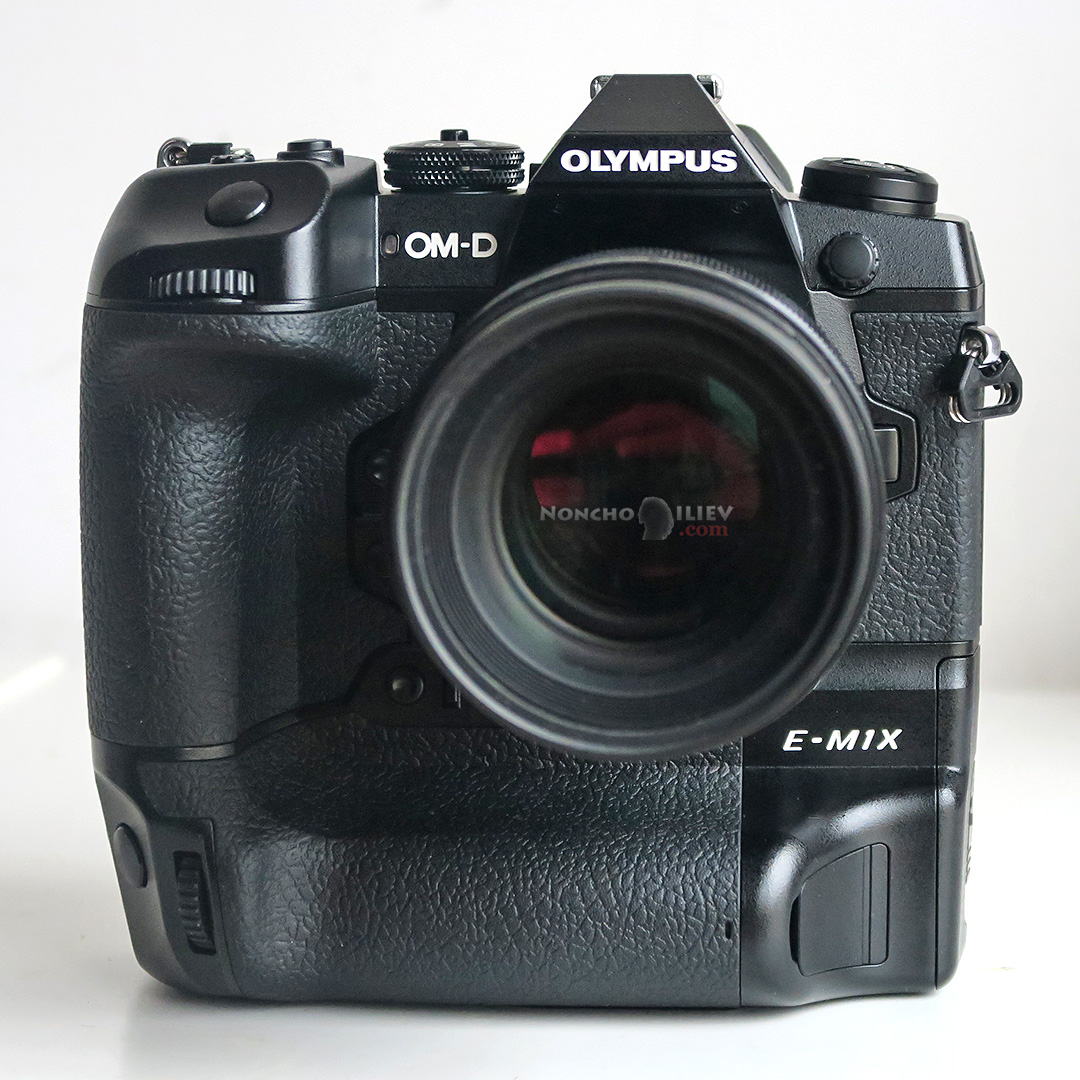 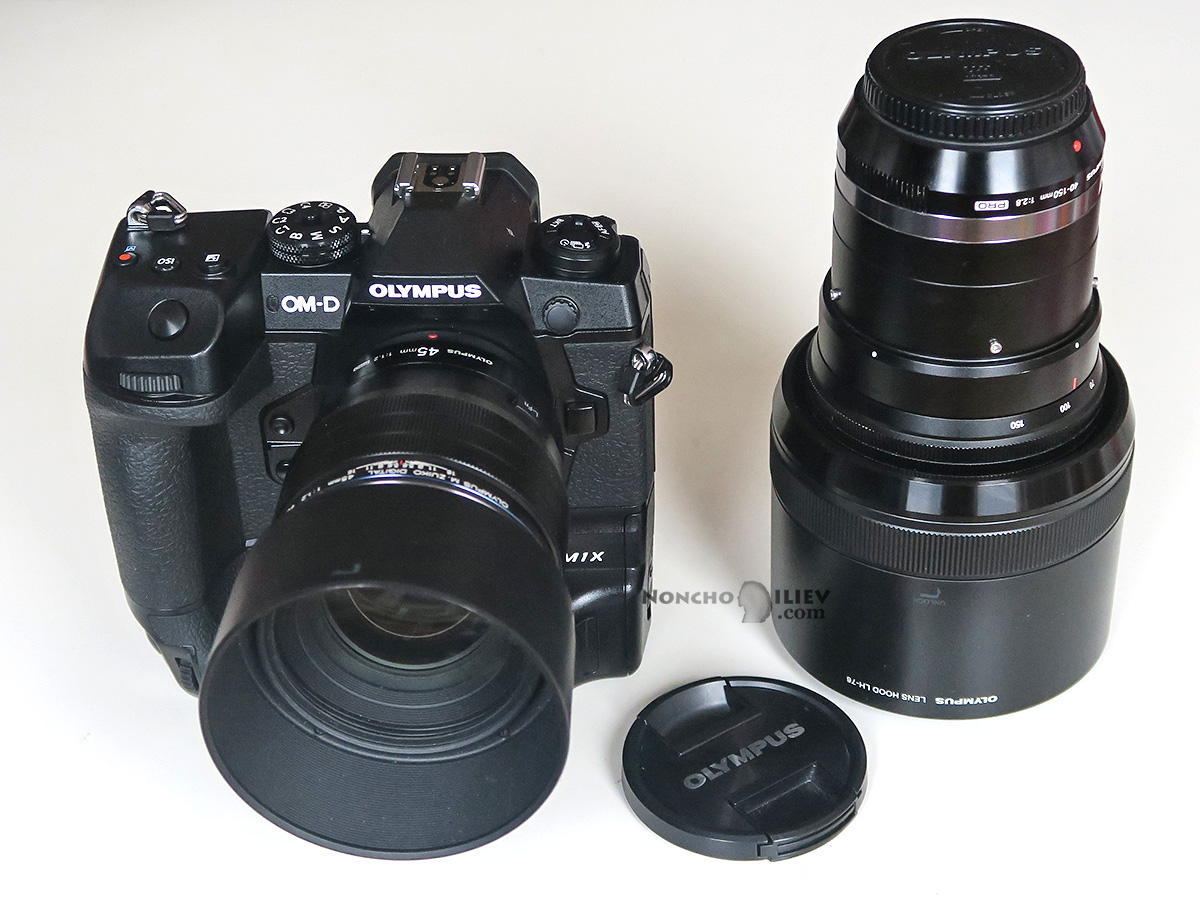 Few more details about the body. Fully articulating touchscreen. This is my favorite type, because it gives you many options. In tough conditions you can even close it for protection. There are a lot of options around the screen – buttons, dials and joysticks, which I can’t even describe in details 🙂 You have many customization opportunities. I can say, that even that I’m not using Olympus daily, (I’m using another pro body), it was fairly easy to get used to it.

There are more control options on the top of the camera, but I’m missing the typical(for such camera) small info display. And there is an empty space for it! 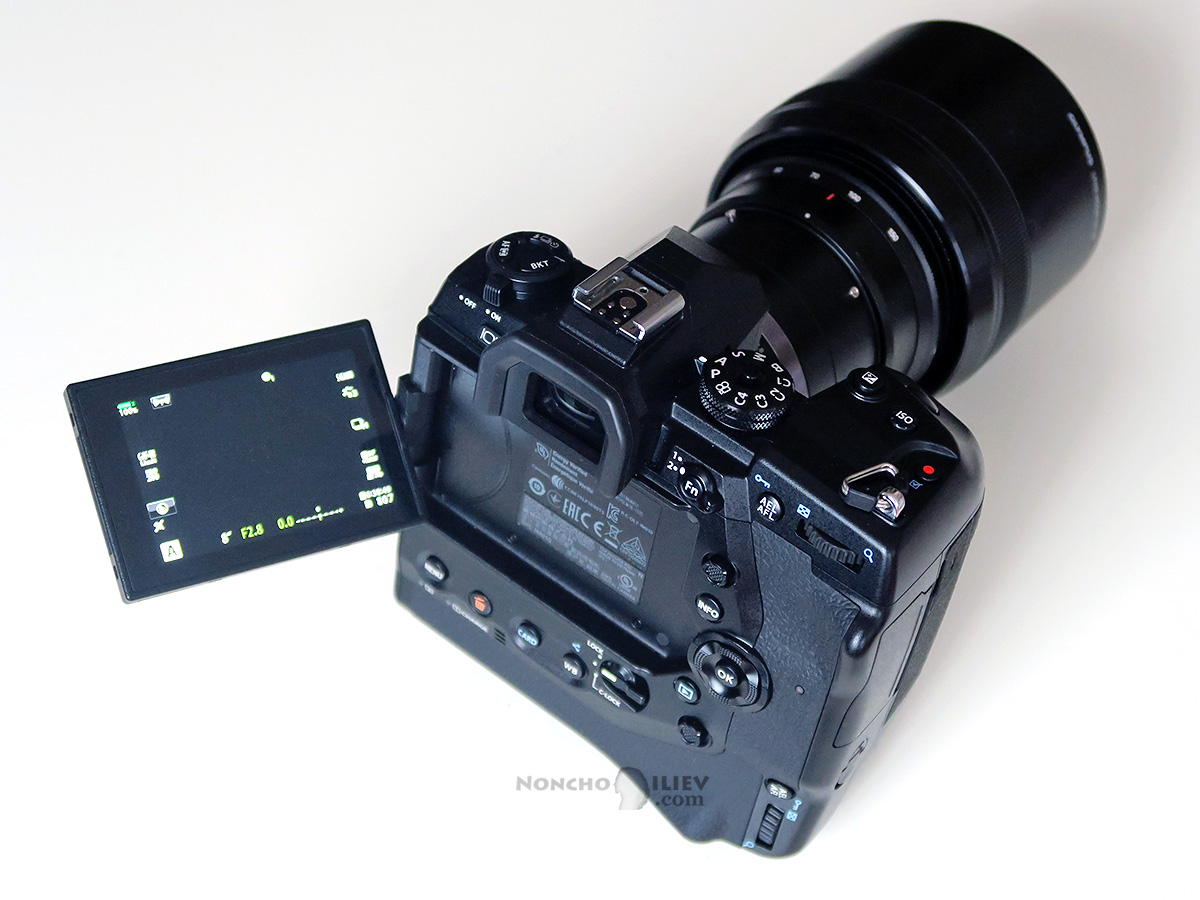 And a comparison with my old Canon 1D X. The Olympus body is just a bit smaller, but a lot lighter (~350 grams). At first sight the Oly’s display looks bigger, but if you check out the previous picture, you will notice the thick bezel around the usable part of display. In reality the Canon display is a bit bigger 3,2” vs 3”. It’s not something, that can reduce usability in any way, but it’s 2019th and we are used to our bezel-less phones 🙂 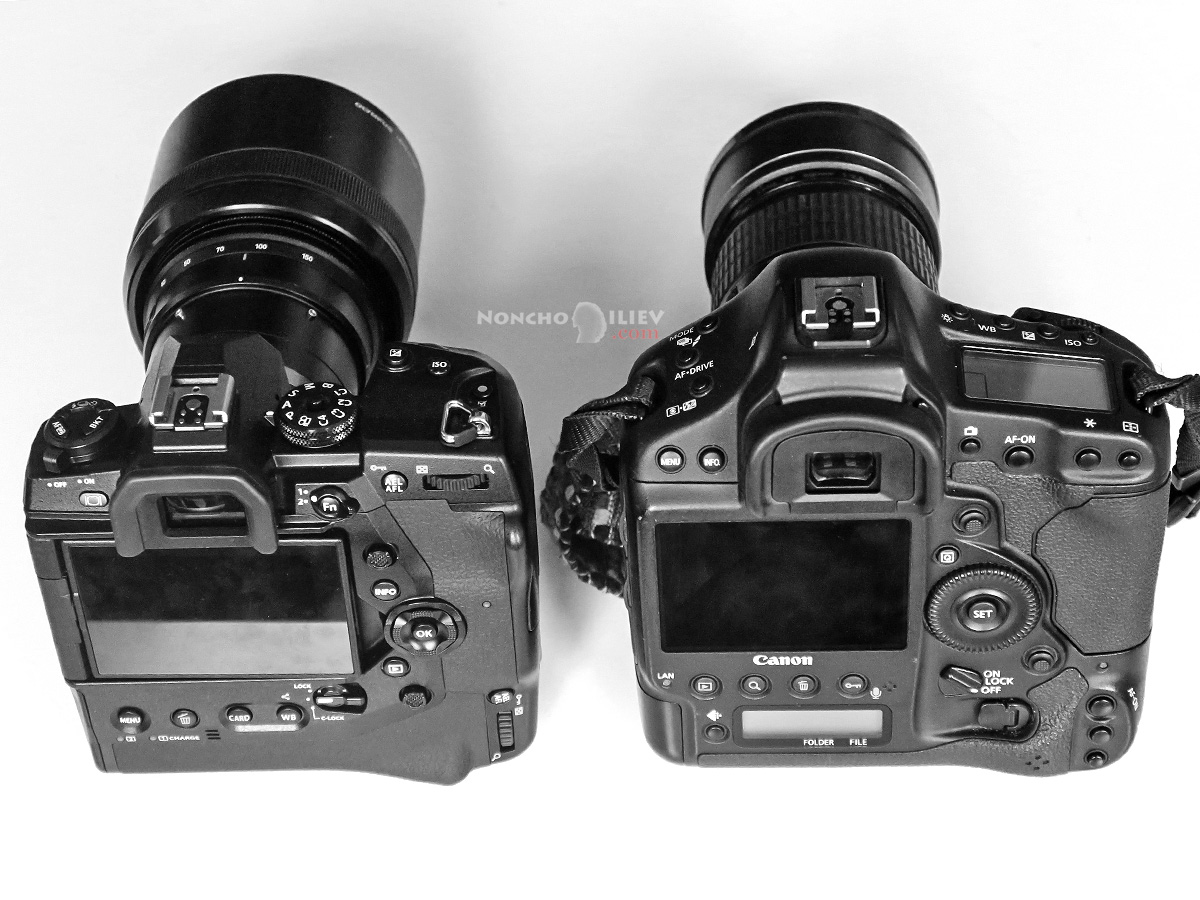 There was no time for more looking at the camera, so I started with the tests outdoors. One of the most interesting features is the unique image stabilization – up to 7.5 EV (with IS lenses). I wanted to test the real stabilization, so I choose to do it with non-stabilized lens 45 1.2 PRO. With 90mm ful-frame equivalent without IS I would choose a speed around 1/125 sec. My initial expectations were that I would be able to shoot between 0.5 and 1 sec.

The next photo is made during the night with 2 seconds exposure hand held, no special technique for stable hands. And it was my first try! I was with my bicycle, I stopped just for 2 shots there. When you do some photos right after sport activities you don’t have the best hands stability. And in this conditions the picture was fine even at 2 seconds, like taken from tripod. This removes the tripod need for 99% of the photographers! 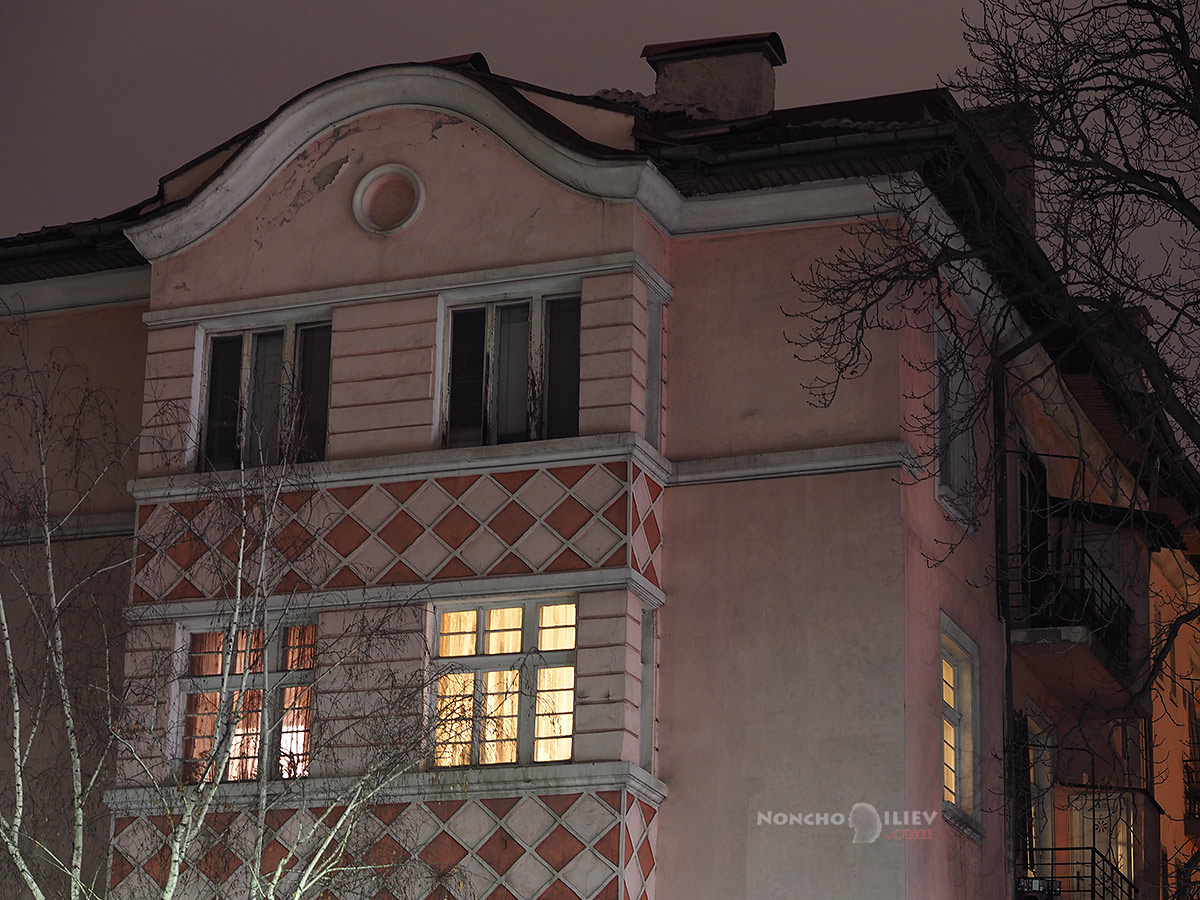 I’m continuing the tests with other new feature – hand held Hi-Res mode. Now you can choose(from the menu) and shoot high resolution without tripod, in the end you receive a 50MP photo(the standard sensor resolution is 20MP). Many of the test shots I’ve seen were prepared artificial indoor shots. I think this could be nice for the landscape photographers and this is why I have tested it with 40-150mm lens from Sofia, Bulgaria to the nearby Vitosha mountain. 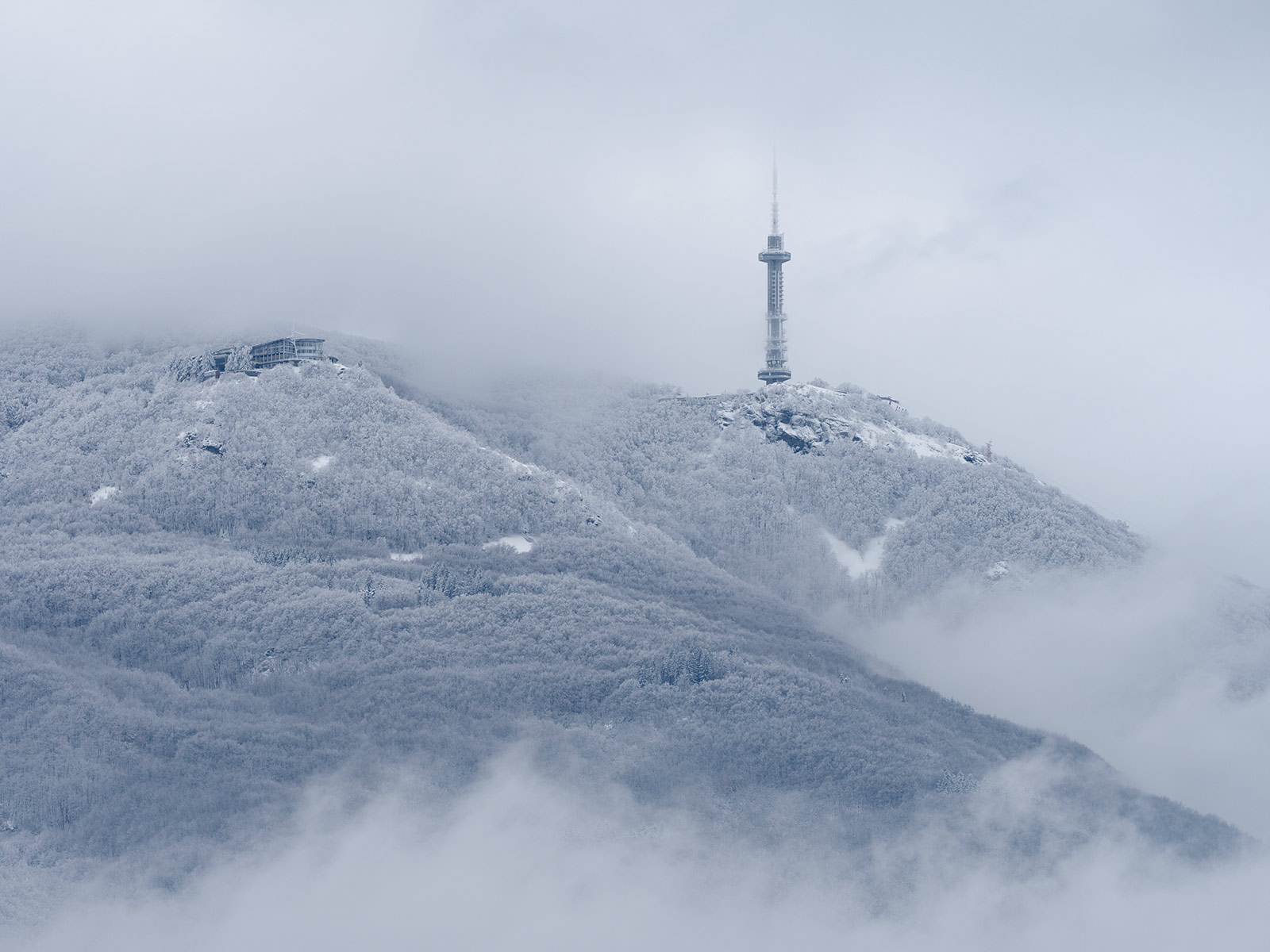 Here is a 100% cut comparison between the normal shoot and from the Hi-Res one. I have enlarged the normal shot to the size of the high resolution shot. Click for larger view or download to see it better. 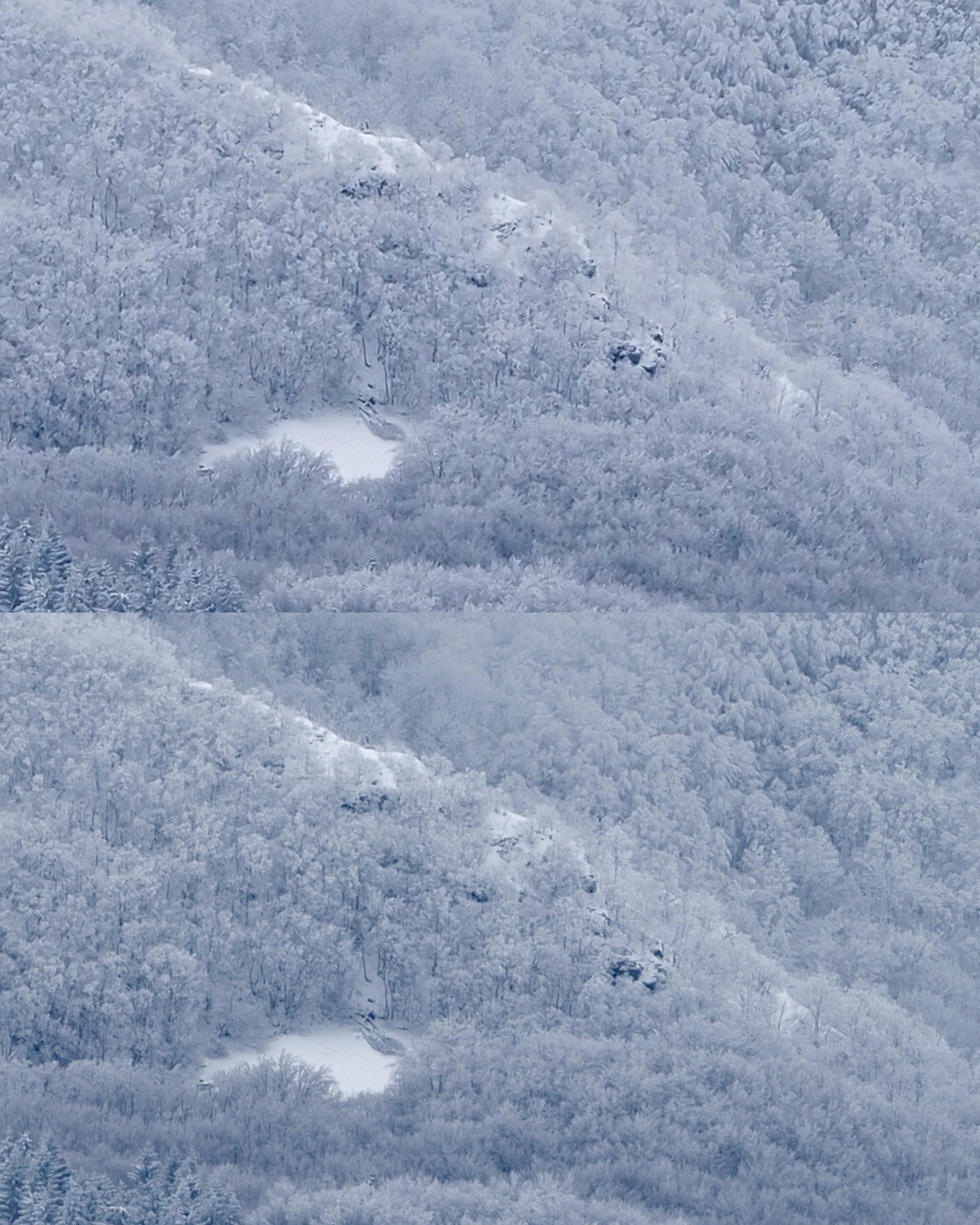 It’s visible, that there is more detail on the second picture. The difference reminds me of comparison with or without teleconverter – that could be useful in some situations.

I wanted to test if this Hi-Res mode can be useful for a better night shots image quality (noise/details). I have tested a night shot with 45 1.2 Pro hand held at 1600 ISO and the final result was really impressive. In the low light it took more time in this mode, until the final image was taken and ready. I’m impressed that I was able to do it hand held. 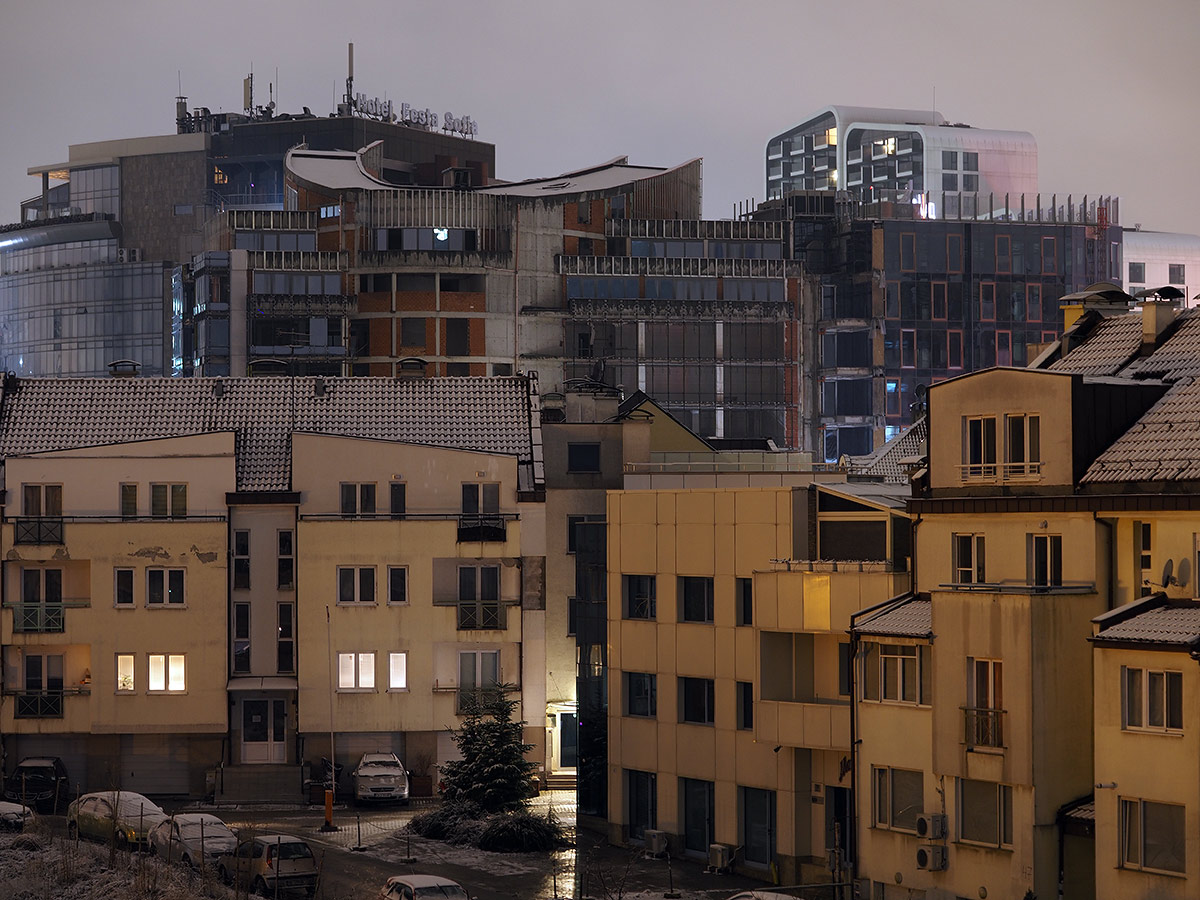 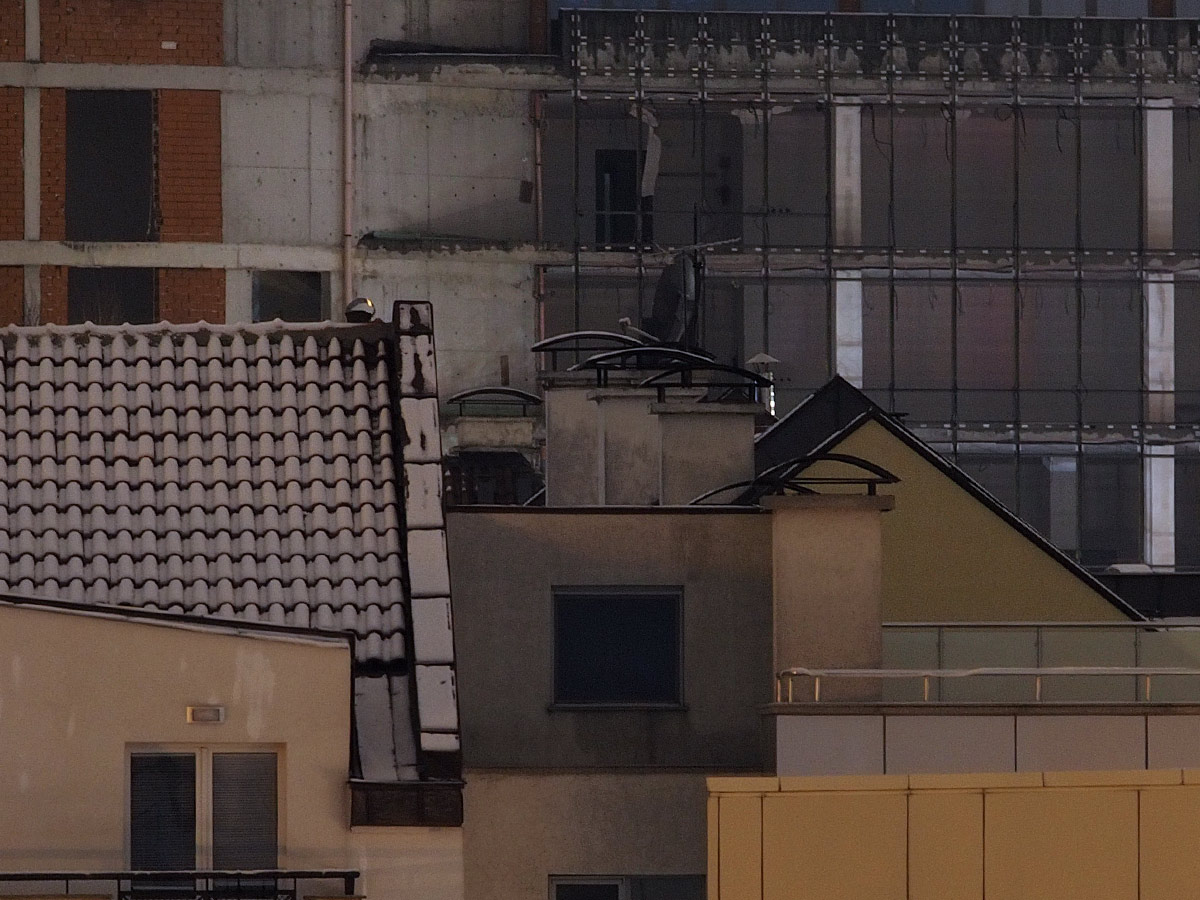 I had to get my child one evening, when the snow was just starting. I took E-M1X with the 45mm lens, without any doubts. The body is water and dust proof (IPX 1), the lens is also weatherproof. I made a few pics during the nightfall and I got nice results.

Then I took my kid and tried something harder – continuous focus with tracking on his face, while the snow was falling. The main light was from the cars on the street. There were some shots with missed focus, but the good ones were fantastic because of low speed movement and a nice lens. 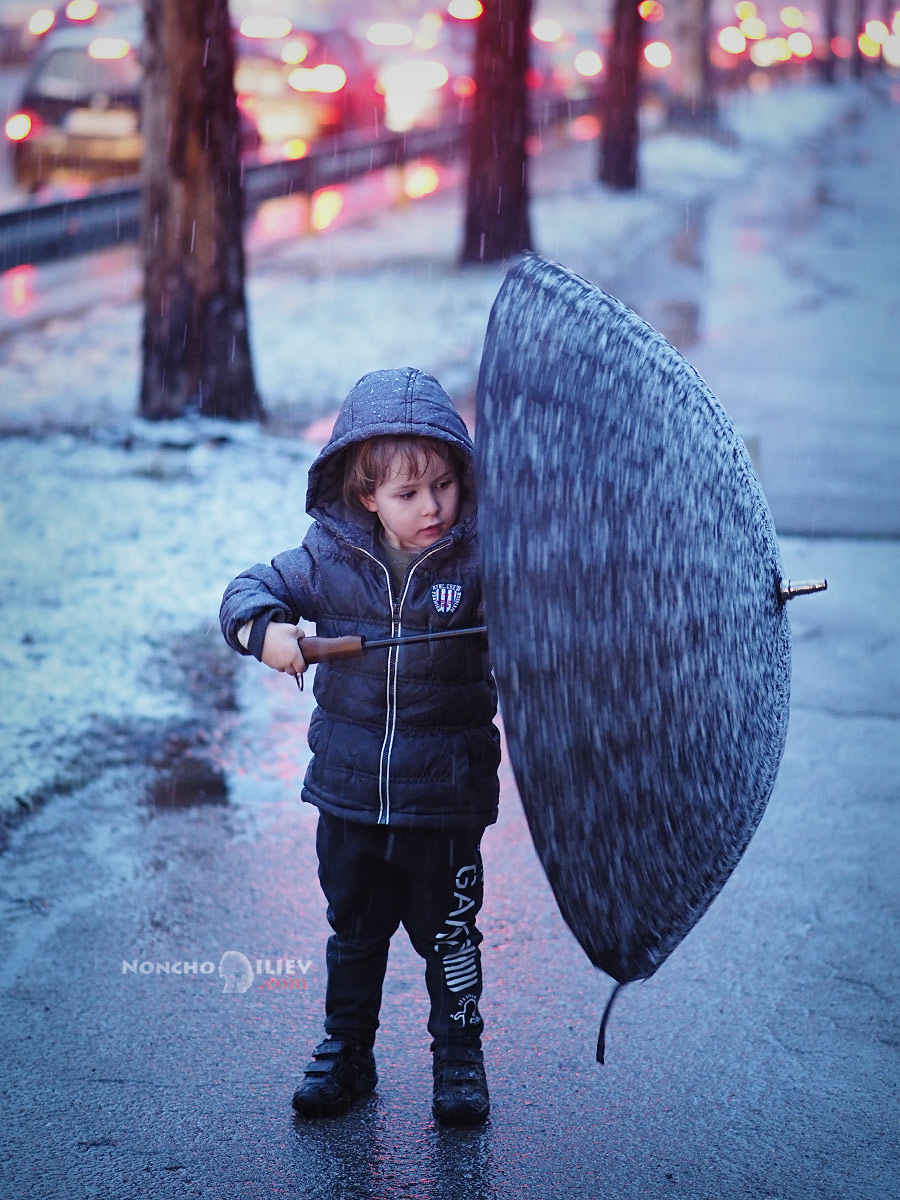 With a lens like 45mm 1.2 body with integrated battery grip is not really needed. Without it the weight would be reduced a lot.

The case is different when you have to shoot with 40-150 PRO and 300 PRO lenses, where such body is very comfortable. It’s time for my impressions during the ATP 250 tennis tournament. It’s my 3rd consecutive year as a photographer there, I know that I need a fast camera with good sensor and a good bright lens. I liked Olympus 40-150 2.8 PRO when I tested it a few years ago. Now it was time to check the camera.

I was interested to see how many shots I can do with the 2 large batteries during sports shooting. I noticed that there is only one battery indicator, which could be confusing, especially when you put a new battery. I have other mirrorless camera with a grip and it has info for both batteries, without need to go deep in the menu. I hope Olympus can do that in some of the next firmware updates. About the battery life – I did about 1000 shots in series with more looking at the pics and menus than usual, so the 2 batteries have quite good power reserve.

E-M1X is a camera with many options in the menu. There are plenty of focus customizations, but as I did not have so much time I choose the classic for sports – fast series and continuous focus with tracking (C-AF+TR). 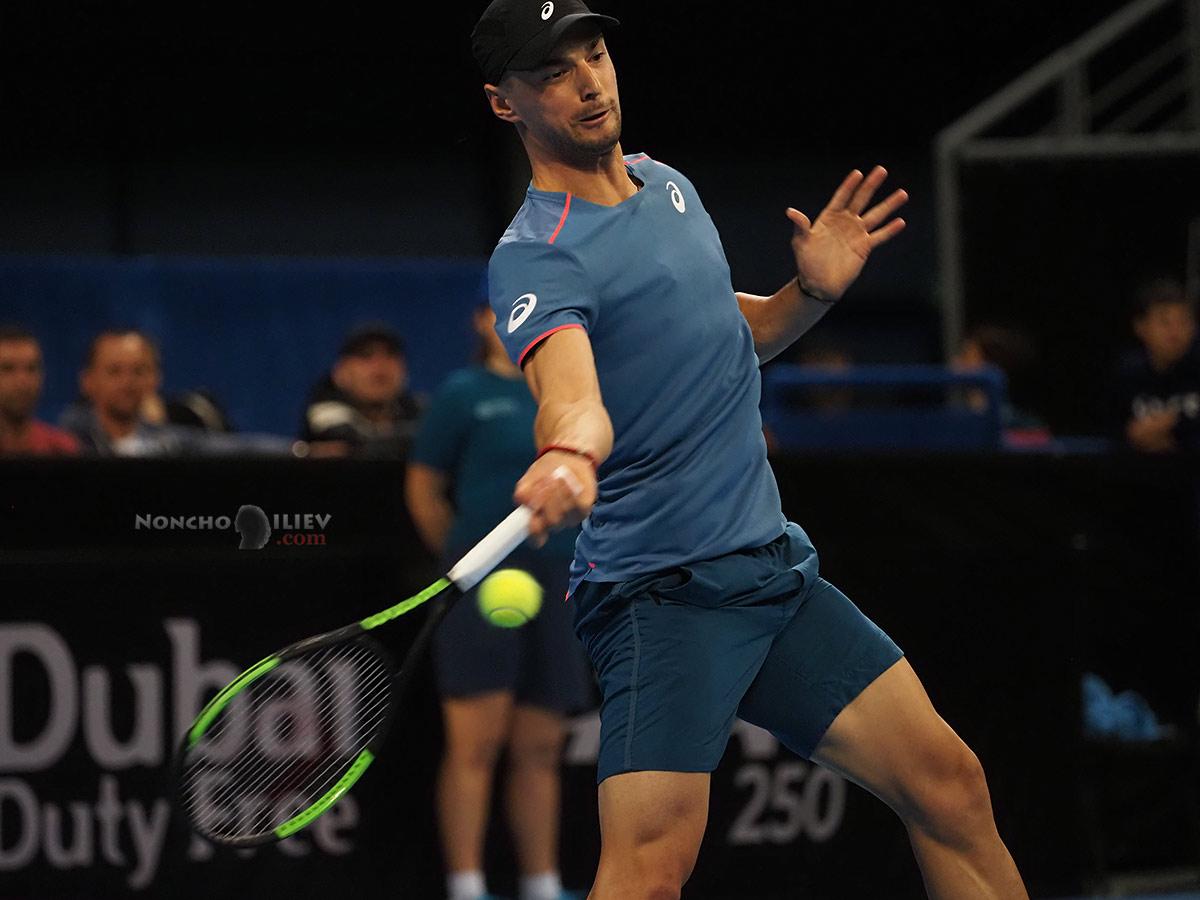 Normally in the beginning I had more missed focus shots, while I found better settings. Face tracking was good, but in some key moments of fast moving or when the player turns his head away, the focus was moving to another fast moving part like the racket or foot. Sometimes the system does not found focus during a series of shots, if the player was moving fast sideways and backward. Those problems could be improved with better settings or firmware update. It’s strange that there are predefined trackings for trains and planes, but not for sports with people. For example 7 years old Canon 1D X have such AF settings for popular sports like tennis, football and etc. 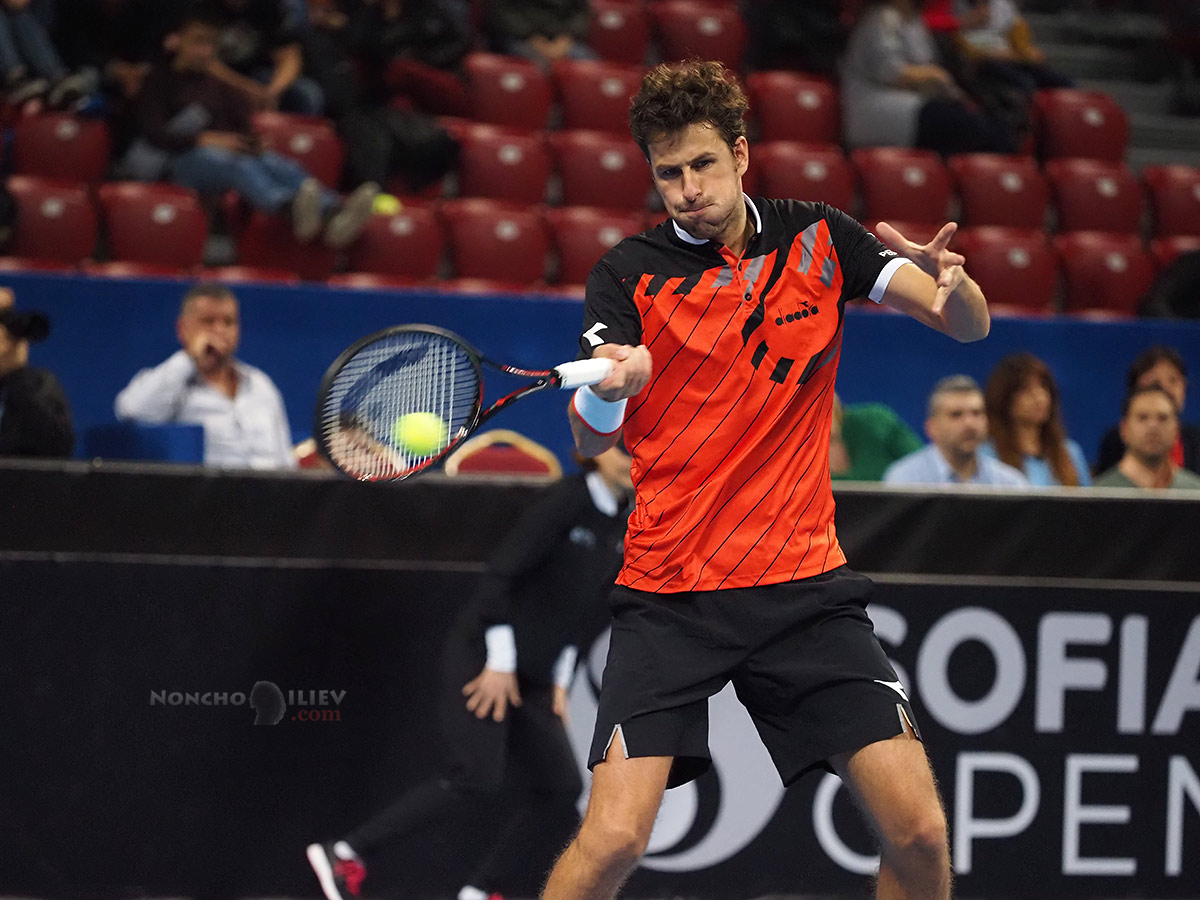 There was another thing, which restricted me a bit. To have a good speed for sports 1/1000 sec and F2.8 I needed ISO between 3200 and 6400. My opinion is that above 3200 ISO the sensor performance is not that good, we need more noise reduction and less details. In sports photography we often need to crop and correct the exposure, and that makes the noise more visible. Of course that’s also a personal feel about the image 🙂 Unfortunately Olympus don’t have F1.8-2.0 telephoto lens above 100mm. That would bring them closer to the bigger sensor brands – more depth of field control and less noise for better overall image quality in such conditions. 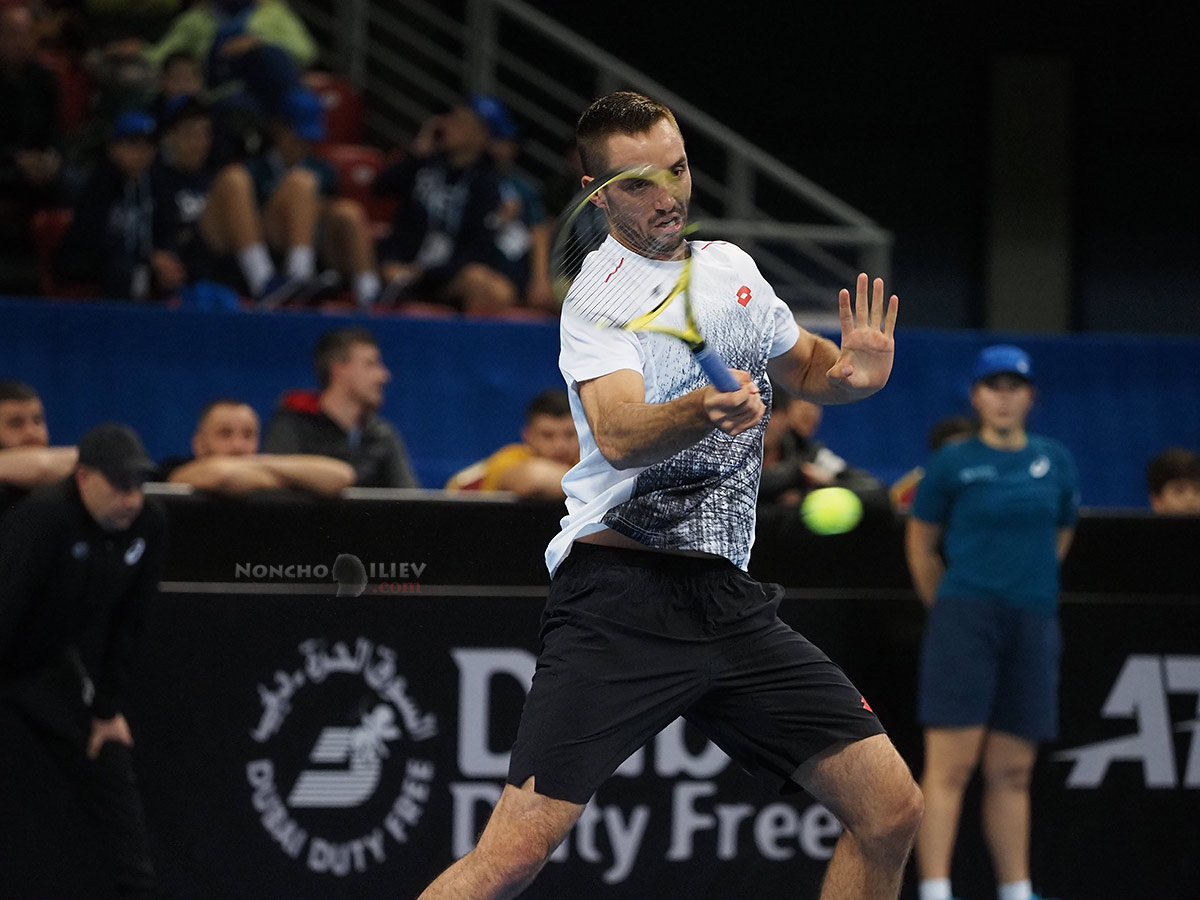 After a RAW + JPEG series, while the camera writes the information to the card, the recent shots were not able to be seen immediately. It’s a good idea to reduce the JPEG quality or resolution(a single JPEG is 10+ MB) and of course use a faster UHS II SD memory card.

I have to point the biggest Olympus advantage – even with the big size body the system was twice lighter than a Canon 1D X with Sigma 300 2.8 lens, which I used for the rest of the tournament. When you shoot for hours it makes a huge difference, with Oly there was no need for monopod. 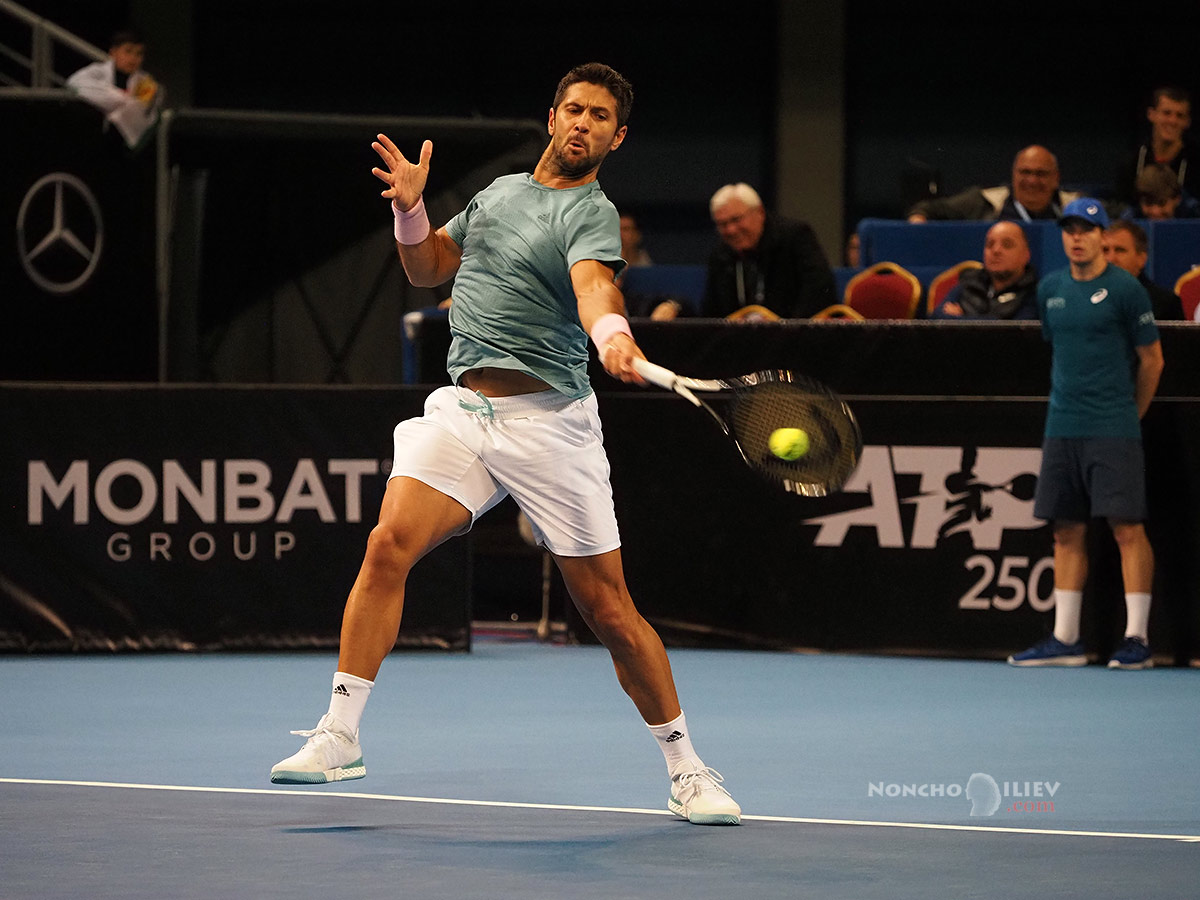 I had a lot of good photos from the tennis shooting, the camera was fast enough. Unfortunately I forgot to test the Pro Capture Mode, which is something unique, compared to the other manufacturers. It could be an advantage for sports and other action photography like wildlife and concerts. I think that Olympus have a lot of proper lenses for concert photography. If I have such chance I will write more impressions.

A little summary of my short experience:

Olympus E-M1X is a great professional camera, which gives you many opportunities for settings and personalization. Amazing image stabilization. Pleasant user interface and controls.

Disadvantage found during indoor sports shooting – there is a need for more predefined tracking focus algorithm for different sports.